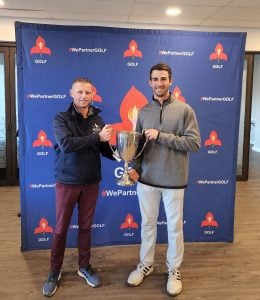 The Bellville Golf Club played host to 68 of the region’s top amateur golfers on Sunday, 24 July 2022, on a cold, winter’s day.

As a result of abundant rainfall over the past month, Bellville Golf Club’s course was in excellent condition, making it a very desirable golf course for scoring.

Altin van der Merwe (Humewood), a household name, wins the Bellville Open by three shots over Matthew Cooper (Clovelly). According to Van der Merwe, the first round was a seesaw affair. This was due to birdies on holes 1, 7, 8, 11 and 15 offset by bogeys on holes 4, 14, 16 and 17. Despite a slow start out of the gates, he managed to bounce back with a 69 in the afternoon, ending up with a winning score of -4.

Cooper, who has been in good form of late and has been a familiar face on the podium, was unable to carry the momentum he gained in round one into round two. A series of unforced errors, resulting in bogeys on holes 13, 14 and 15, spoiled his chances of securing a second victory.

Hannes Conradie (Bellville), capitalized on home advantage to secure a third place finish with rounds of 70 and 74. Conradie recorded seven birdies and one eagle during both rounds. It was a double bogey on holes 11 and 18 in round 1 along with three bogeys in the last six holes of round 2 that prevented him from achieving his first victory at his home course.

It was a tight competition at the Mid-AM Section, with three shots separating the winner from the third place finisher. Gerlou, who had trailed by four shots after the first round, surged forward in round 2. He found his groove and his performance was exemplary as he slammed a string of birdies on holes 3, 4, 5, 10 and 18. A score of 78 and 69 earned him a two stroke victory over Neil Davids (Rondebosch) who shot 74 and 75. The third place finisher was Le Riche Ehlers (Bellville) who carded rounds of 74 and 76.

Tara Nieuwoudt (Bellville) continues to dominate the Women’s Section. A one-shot victory over the Chen Sisters saw her capture her third victory in the PAT Series.

Thanks to our continuous sponsors, listed in no particular order, for making the PAT Series a tremendous success.