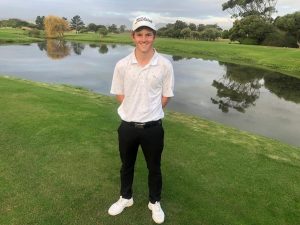 The prestigious NOMADS WP Junior Championship Qualification took place at Strand Golf Club on the 14th July. Although the day started with some light showers, it turned out to be a beautiful day for golf. Compliments to Strand GC for presenting the players with a course that was in great condition, with the greens in particular of high quality championship standard.

This tournament brings together the most talented junior golfers in the Western Province.

The strokeplay component, on the Thursday, was keenly contested with a total of 9 players within 2 shots of the morning leaders – namely Alex Utterson (Steenberg) and Taahir Mallick (Rondebosch) both on 71.

In the end, a birdie on the final hole, the par 5 18th, separated the two local members Jack Brugman and Andries van der Vyver. Jack had a 72 in the morning session followed by a superb 4 under par 68 in the afternoon.  Jack had a total of 10 birdies on the day offset with 6 bogeys. Andries, who has been in a rich vein of form of late, completed his 2nd 18 in 69 – a steady 5 birdies and 2 bogeys. In joint 3rd place was James Boustead (Erinvale) after rounds of 72 and 70 together with Taahir Mallick, after a steady pair of 71s.

Top 8 qualifying scores to proceed to the matchplay stages were –

The other division results were – Christopher Nimb (Erinvale) in the B division with an 80, Tylo Franks (Durbanville) 33 points in the C division and Arman Patel (Steenberg) 76 gross in the Under 13s.

15th & 16th July – The matchplay component followed thereafter for the next two days. The same brilliant winter weather, that prevailed during the strokeplay, continued for the duration of the matchplay.

The top 16 qualifiers from the A division strokeplay played in the matchplay stages – the top 8 for the Championship Final whilst the next 8 played for the Plate Final.

In the A division Championship final, golf of a high standard was played by the two finalists, namely Andries van der Vyver and Jack Brugman. On the way to the final Andries beat Jan Stals van Rooyen 6&4 as well as the in-form James Boustead 4&3. Jack progressed by beating Bjorn Nord 3&2 followed by a 2&1 victory against Pearce Lewin.

The Championship final saw Andries quick out the blocks with birdies on the 1st 4 holes, to take a 2 up lead, which he never relinguished.  Although Jack displayed a never-say-die attitude it was a bridge too far. A good 4&3 win by Andries van der Vyver to be crowned WP Junior Golf matchplay champion for 2022.

What a day for the van der Vyver family!! The twins – Andries winning the Championship final and Nicolas the Plate final.

In the B division, Christopher Nimb beat Cloete de Jager 3&2 while  both the C division as well as the U13s had a titanic struggle – both games finishing on the 19th with birdie 3s!! The C division saw Codi Ruiters beat Nico Grove whilst in the U13 division Even Marais beat Arman Patel.

To view the results please click on the below links: