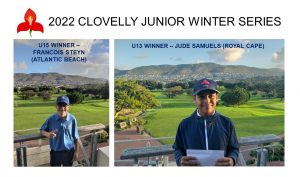 The first in a series of 4 events, called the 2022 Clovelly Junior Winter Series, took place at the scenic Clovelly Country Club – these events are to promote golf amongst the Under 13 and Under 15 age groups.

In the Under 15 age group Francois Steyn (Atlantic Beach) birdied his final hole (the par 5 9th) to beat Bjorn Nord (Milnerton) by a close 2 shots – Francois recorded a fine 73 with Bjorn on 75. They were followed by the Van der Vyver twins, Andries and Nicolas, both recording 77s – Andries finishing with a eagle 3 on his final hole whilst Nicolas dropped a shot.

The Under 13 division was a tight affair with Jude Samuels (Royal Cape) edging local member, Evan Marais, by a single shot – Jude shot 78 while Evan had a 79. In 3rd position on 82 was another local member, Ollie Malyon.

The Under 13B division was won on 38 points by Josh Katz (Plettenberg Bay) closely followed by Nico Grove (Parow) and Luciahno Smith (Kuils River), both on 36 points.

The next Clovelly Junior Winter Series event takes place on the 19th June.