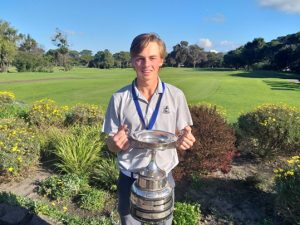 It took an additional 9 play off holes at KD Mowbray Golf Club to decide the eventual winner of the 2022 edition of the historic JAW Prentice Memorial competition, possibly the oldest junior event still being played in South Africa.

At the conclusion of regulation play, after scintillating rounds of 67 by James Boustead (Erinvale) and Jan Stals van Rooyen (Royal Cape), they headed back to the course to decide the winner with a sudden death play-off.

Little did anybody expect that 9 play-off holes later, a deciding birdie by James Boustead, at the par 5 9th, clinched a hard fought title. The standard of golf in the play off was of a high standard.

James‘s round was highlighted with a birdie eagle birdie stretch through the 8th 9th and 10th holes, while Jan Stals played his final 8 holes in 4 under par.

The history of today’s tournament goes back to the turn of the last century. J.A.W. Prentice was killed in action in the first few months of World War 1 but before going on active service he bequeathed 60 pounds to the SAGU for the purpose of encouraging the youth of South Africa to play golf. An amount of 10 pounds was given to the WPGU and it was decided that the most suitable way to carry out Prentice’s wishes was to purchase a floating trophy. The first JAW Prentice Memorial competition took place in 1921!

Besides the scores posted by James and Jan Stals, other great rounds were recorded by the two15 year olds – a 68 by Andries van der Vyver (Strand), finishing 3rd, and a 71 by Bjorn Nord (Milnerton).

The B division was comfortably won by local member Alistair Simpson on a gross 80 whilst another local member, Taedi Hansraj secured the C division with 40 stableford points.

The Under 13s produced some fine golf in the sublime conditions with last year’s winner, Arman Patel (Steenberg) pipping Evan Marais (Clovelly) by 2 sots, after  carding a solid 74 gross. 9 year old Nico Grove (Parow) was the runaway winner in the U13B division with 43 stableford points, posting a gross 82.