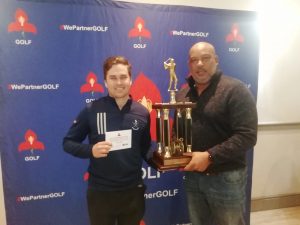 Cape Town Weekends are synonymous with cold and wet weather.

Table Mountain, that overlooks the King David Mowbray Golf Club, was the backdrop for the 7th stop on the PAT Tour. Misty rain and clouds enveloped the mountain, setting the stage for an enthralling tournament.

The KD Mowbray Open brought together enthusiastic and committed golfers from across the Western Cape Province, competing for the coveted championship.

Round 1 – Christian Helmbold (Westlake) recorded the low round of 69, including two birdies (holes 5 and 12), an eagle on hole 6, along with one drop on hole 13.

The veteran Weyers Janse van Rensburg (Atlantic Beach), who is accustomed to adverse weather conditions, carded a round of 70, with three birdies (holes 6, 12 and 18) and one bogey (hole 2). Despite his birdie streak, his round of 73 fell short of what he had hoped for in round 2. A gross score of 143 put Weyers in second place in the Mid-Amateur Section.

Defending champion Cameron Johnston had a slow start to his campaign with three birdies and three drops carding a round of 72.

In Round 2, the stage was set for a dramatic finale.

Cameron Johnston fought valiantly to defend his title, but an unforced drop on the last hole awarded Christian bragging rights to be crowned the KD Mowbray Open Champion.

Other notable players included third-place Sean Howell (Durbanville), whose recent swing change was rewarded with rounds of 73 and 69.

Wayne Melle (Rondebosch) posted rounds of 72 and 71, including eight birdies and seven bogeys, to record the top finish in the Mid-Amateur section. Riaan Lewis, a regular on the podium continued his streak of stellar performances. A first round of 75, coupled with uncharacteristic mistakes on the back nine, left him chasing the game. He finished 3rd with an overall gross score of 146.