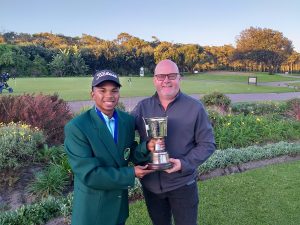 The Mini Masters has a proud history in WP Junior Golf with its tournament sponsor, Golfing Association of Pinelands, having been associated since its inception in 1990. The tournament has seen its winner’s progress to perform on the local and international world golfing stage. Just this past weekend, 22 year old Deon Germishuys, the 2017 Mini Masters winner, finished tied 5th in the Irish Challenge held at “The K Club” (part of the European Challenge Tour) recording scores of 66 72 73 68=279.

If one looks at the names of the past champions of the Mini Masters, on the Brian McCabe Trophy (Under 15) as well as the Jake Schumann Trophy (Under 19), one will see that a number of these players have progressed to reach the highest golfing accolade. A case in point is Trevor Immelman\ – Trevor won the 2008 Masters Tournament at Augusta National Golf Club.

Through the years golf of a high standard has been played in this event – in 2011 talented Dylan Raubenheimer scorched around KD Mowbray Golf Club in 7 under par – rounds of 66 and 71!

Every year for the past 32 years (no event took place in 2020) the winner of the annual Mini Masters, traditionally played at KD Mowbray Golf Club, has been awarded a green jacket. This year the recipient of the jacket was 17 year old Atlantic Beach Links member Mitch Phigeland. Two solid rounds of 71 and 70 – a 3 under par total that included 9 birdies and 6 bogeys over the 36 holes.

After the morning session, Pearce Lewin (Steenberg) led the way with a 69 – a steady round that included 4 birdies and a bogey at the par 4 17th. In close pursuit was Boston Franks (Steenberg) on 70, then followed James Boustead (Erinvale), Mitch Phigeland (Atlantic Beach) and Eric Venter (Kuils River) all on 71.

At the end of the day the tussle was between Mitch Phigeland and James Boustead. Mitch had a healthy lead going into the final few holes with James leaving himself too much to do at the end. However James tried valiantly finishing strongly with birdies at the 15th and 18th. A close 2nd by the current in-form player, 15 year old Bjorn Nord (Milnerton) continued with his recent impressive form to finish 3rd after a brave afternoon 69. Matthew Lotz (Milnerton) showed a welcome return to form shooting the afternoon low score of 68.

The Brian McCabe Trophy, for players that are Under 15, was comfortably won by 14 year old Noah Musikanth (KD Mowbray) with rounds of 74 and 76. Noah’s morning round of 74 was spoilt with a 5 on the par 3 16th. Noah would have gained much confidence with this performance – an overall 11th position.

A sincere thank you to the Golfing Association of Pinelands for their sponsorship, commitment and enthusiasm and to King David Mowbray Golf Club for the privilege of hosting this event at a great venue.