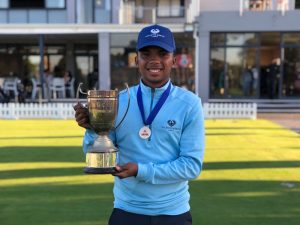 The 7th event in the local 2022 Junior Championship Tour, the RONDEBOSCH Junior Championship, saw yet another different champion crowned – on this occasion 16 year old Mitch Phigeland (Atlantic Beach). A fine birdie birdie finish on the final two holes saw Mitch home with a 71 from a host of players that were close on his heels.

Mitch has a reputation for steady golf and this he proved again with 3 birdies and 2 bogeys over the 18 holes. To say that the players encountered a perfect day for golf is an understatement – Rondebosch Golf Club was in superb condition with hardly a breath of wind on the day.

Other noteworthy results was the B division winner, Zayaan Hendricks (Royal Cape) on gross 85, the C division victor was Taite Sauls (KD Mowbray) on 42 points. The U13s was runaway win for 12 year old Vincent Venter on 77 gross whilst the U13B winner was 10 year old Nico Grove (Parow) on 38 points.

The next WP Junior Golf event is the SOMERSET WEST Junior Championship on Friday the 17th June.