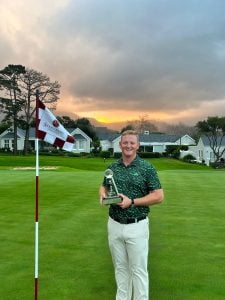 The Steenberg Golf Club, one of South Africa’s most prestigious golf estates, demanded precision shot making from players of all levels. Despite the rain, the course conditions were impeccable, with carpet-like fairways and greens running at 11.3 on the stimp meter, which are easily comparable to those of the US Open.

In Round 1, Travis Proctor (Durbanville) held the only subpar round with a score of 71 that included five birdies. His putter let him down in Round 2, and he racked up six three-putts, ruining his chances of capturing his second title of the season.

Francois Celliers (Strand) had a shaky start to his campaign, posting an uncharacteristic 79 in round 1. However, he rebounded with a solid 69 in round 2, featuring five birdies on holes 4, 7, 12, 17 and 18.

In no particular order, we would like to express our sincere gratitude to the following sponsors: