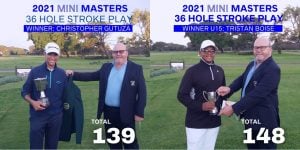 The Mini Masters has a proud history in WP Junior Golf with its tournament sponsor, Golf Association of Pinelands, having been associated since its inception in 1990. The tournament has seen its winners progress to perform on the local and international world golfing stage.

A case in point is Trevor Immelman, currently part of the CBS Sports golf broadcast team. Trevor first won the Mini Masters as a 14 year old in 1994 and then proceeded to win again in 1995, 1996 and 1997 – a feat that may never be repeated.  As we all know Trevor won the 2008 Masters Tournament at Augusta National Golf Club.

If one looks at the names of the Mini Masters past champions, on the Brian McCabe Trophy (Under 15) and the Jake Schumann Trophy (U19), one will see that a number of these players have progressed to play at the highest golfing level.

Every year for the past 31 years (unfortunately the Mini Masters did not take place in 2020) the winner of the annual Mini Masters, traditionally played at KD Mowbray Golf Club, has been awarded a green jacket. This year the recipient of the jacket was 17 year old local member Christopher Gutuza. Christopher put together two solid rounds of 71 and 68 – to finish at 5 under par. A close 2nd, and the winner of the Brian McCabe Trophy in 2018 and 2019, was16 year old Jack Buchanan on 140.

Jack Buchanan was the early leader after round 1 with a 69 – this included a disappointing 7 at the par 5 9th. In close pursuit were Tristan Boise (Atlantic Beach) on 70, Boston Franks (Steenberg) and Christopher Gutuza both on 71. With 9 holes to go Jack led Christopher by a single shot. The 450 metre par 5 14th was the defining hole – after Jack had a birdie Christopher proceeded to eagle to suddenly move 2 ahead with 4 holes to play. Although the final hole was a struggle for Christopher, he managed to keep his nerve to sink the final 1 metre winning putt.

An exceptional performance on the day was 18 year old Isabella van Rooyen (Clovelly CC). Isabella, the top WP female junior golfer and ranked 4th in South Africa, finished a commendable 3rd – rounds of 72 and 69. Isabella showed why she is so highly rated nationally – producing an astonishing 5 birdies whilst playing the 8 par 3s – finishing the par 3s on the day in 5 under par!

Top 5 in the U19 division (Jake Schumann Trophy)

The Brian McCabe Trophy, for players that are Under 15, was won by 14 year old Tristan Boise (Atlantic Beach) with rounds of 70 and 78. Tristan’s morning round was particularly steady – 4 birdies and 2 bogeys. Tristan would have gained much confidence, going forward, from this very solid overall performance. Runner up on 150 was Jaydon Galant, after rounds of 73 and 77.

Top 5 in the U15 division (Brian McCabe Trophy)

A sincere thank you to Golf Association of Pinelands for their sponsorship, commitment and enthusiasm and to King David Mowbray Golf Club for the privilege of hosting this event at a great venue.