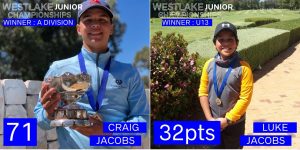 Another fine performance by 17 year old Craig Jacobs (Atlantic Beach Links) by adding the WESTLAKE Junior Championship to his impressive list of achievements. This follows after Craig won the 36 hole Cape Town Junior Open, the previous day at Clovelly Country Club, in impressive style, closing with a 65, to finish at 8 under par overall.

Craig Jacobs has had a fantastic run of success, a real purple patch, winning the

Westlake Golf Club, which lies against the slopes of the Silvermine mountains – a club with a rich and proud history was a challenge for the juniors. A strong wind made conditions extremely tricky. A steady round of 4 birdies and 4 bogeys told the story of Craig’s round – a level par 71. A distant joint 2nd on 75 was Pascal Gunther (Bryanston CC), recent winner of the CLOVELLY Junior Championship, and Justin Behrens, winner of the DURBANVILLE Junior Championship in June. A number of leading players were missing from the field but this did not detract from the quality of these good returns.

Rondebosch’s Taahir Mallick was a shot behind on 76 – this follows his 72 at Clovelly this past Friday and 71&75 at the Cape Town Junior Open. A player to watch going forward.

The B division was won by Zayaan Hendricks (Royal Cape) on 87 gross, the C division by Ruah Payle (KD Mowbray) on 35 points and the U13s by 10 year old Luke Jacobs (Royal Cape) on 32 points. These scores indicate the difficulty of the course.

The final scheduled junior event for 2021 is the Championship Tour Final being held at Royal Cape Golf Club on Sunday the 10th October.