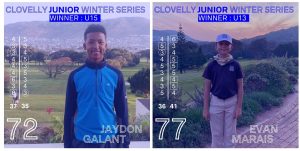 The recent beautiful winter weather of the Cape continued at the picturesque Clovelly Country Club in the playing of the Clovelly Junior Winter Series.

In the 3rd edition of the 2021 Clovelly Junior Winter Series – a series of events to promote golf amongst the Under 13 and Under 15 age groups, the competition was intense with close finishes in both age groups.

In the Under 15 group Jaydon Galant (KD Mowbray GC) secured a bogey at the final hole to beat Noah Musikanth (KD Mowbray) and Boston Franks (Steenberg) by a single shot. Jaydon Galant recorded a level par round of 72. Three under par with 5 holes to play but a double drop at the par 4 7th hole somewhat derailed him. Gerard Hartman (Stellenbosch) finished on 75 with Alex Utterson (Steenberg) on 76.

The Under 13 division was a tight affair with any of 5 possible outcomes. In the end a par on the final hole by 11 year old local member Evan Marais secured a 1 shot win with a 77. In close pursuit were 78s by Booye Walters (Bellville), Henru Walters (Durbanville) and Francois Steyn (Durbanville). Arman Patel (Steenberg) shot a 79.

The Under 13B division was won with an impressive 43 points by Isabella Heber (KD Mowbray) and the Under 15B division by local member Kiash Naidoo on 36 points.

To view the full results for the tournament please click here

The next event on the WP Junior Golf calendar is the popular Mini Masters on Sunday 1st August at KD Mowbray GC.