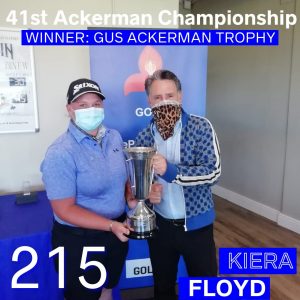 The annual Ackerman Championship was held at Rondebosch Golf Club this past weekend. Although the weather was not perfect the course was in pristine condition after just hosting the Women’s IPT the week before.
The Championship Division played 54 holes.
It was a tight fight at the top of the leader board with our very own Isabella Van Rooyen, Clovelly, fighting for first place against Kiere Floyd from Serengeti. It came down to the wire on the last 18 holes and with Kiera’s birdie on 16th taking her to 1 under for the tournament on a gross of 215 with Isabella Van Rooyen on 216.
B & C Division played 36 holes on Sunday, the 17th October, with a an early 07h30 shotgun start.
Leading the B Division after the first round was Dilshaad Fredericks, Royal Cape, recording a 83 with fellow Royal Cape members, Sarah Van Lear finishing in second place on 84, Christan Booysen in 3rd on with a 85 and Jemma Louw from Durbanville finishing in 4th place on 86.
It wasn’t over yet as Jemma Louw knuckled down to close the deal with a second round of 82 making her the winner of the B Divsion and raising the Raymond Ackerman Trophy in the end.
The C Divsion had a shared trophy this year with Delia Van Wyngaarden & Isabella Heber, both King David Mowbray members, finishing on 189.
In the first round Delia finished tied 6th and Isabella only 1 shot ahead of her tied 4th. Both ladies stuck to their guns and were determined to put their hands on the trophy this year.
A big thank you to Rondebosch Golf Club, their staff and most of all their members who lending us their course after just having to give it up for a whole week to host the Women’s IPT.
To those players who came from far and wide to participate in the Ackerman Championships, thank you.
Most of all, to the Ackerman Family. Your continuous and generous sponsorship is truly appreciated and we are forever grateful to have you on board.