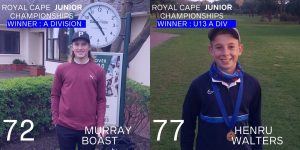 The popular ROYAL CAPE Junior Championship was played in somewhat windy, and at times rainy conditions, at Royal Cape Golf Club. The wet underfoot conditions did not deter a large field of juniors participating, in the hope of winning the title.

Murray Boast (Milnerton) recorded a level par 72 to win the ROYAL CAPE Junior Championship title, thus defending the title he won in 2020 – on that occasion Murray had a fine 68 gross.  It was a steady performance – 3 birdies and 3 bogeys. But it was not all plain sailing. A fast finishing Craig Jacobs (Atlantic Breach Links) fell just a shot short after finishing birdie, birdie, par, over the final 3 holes.

Christopher Gutuza (KD Mowbray) was again amongst the leaders finishing 3rd on 74. On a score of 75 was 13 year old Alex Utterson (Steenberg) and 14 year old Jaydon Galant (KD Mowbray) who completed the top 5 finishers. The ROYAL CAPE Junior Championship was the 6th event in the local “WP Junior Golf Championship Tour”.

Quewin Botha (Atlantis) won the B division by a clear 5 shots – a fine gross 78. A final hole birdie 3, one of only a handful of birdies on this hole, capped a fine day for this young lad. Quewin added birdies at the 11th as well as the 12th holes. Sarah Gutuza (KD Mowbray) capped a fine day for the Gutuza family winning the C division on 36 individual stableford points.

Although it was a somewhat wintry afternoon the youngsters thoroughly enjoyed playing this championship course.