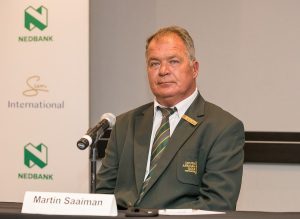 It is with heavy hearts that we share the news of the passing of Martin Saaiman, President of the SAGA.

We would like to extend our condolences to Martin’s family, friends and co-workers following his unexpected passing on Wednesday the 18th August 2021.

Martin (59) served in golf administration for more than three decades, including 12 years as President of the Ekurhuleni Golf Union.

He began representing Ekurhuleni Golf Union on the South African Golf Association’s National Executive Committee (SAGA NEC) in 2008 and was elected chairman of the Championship and Tournaments Committee a year later. In 2013 he was appointed as a national selector and served on the SAGA’s Finance Committee.

His unexpected passing will leave a significant void in the golf industry.