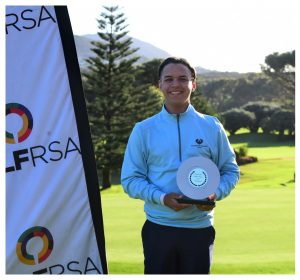 4 October 2021 – A stunning final round of 65 saw South African Golf Development Board member Craig Jacobs close out his maiden national title with a one-stroke win in the Cape Town Junior Open.

The 17-year-old Atlantic Beach Links golfer was well back of first-round leader Johan Bredenkamp, who opened with a 65, when he signed for a round of one-under 71 at Clovelly Country Club.

“I played with Johan, and he was just destroying the course over the first 18 holes,” Jacobs said.

“My game plan was to shoot somewhere between level and three-under. After I made eagle on the 10th hole (his first hole of the final round), everything just clicked, and I fed off that and got the job done.”

He mixed a further five birdies offset by a lone bogey to shoot 30 going out and birdies at the 2nd and 3rd holes got him to eight under for the day through just 12 holes.

With GolfRSA National Squad player Daniel Bennett hot on his heels, Jacobs closed out the win with a solid par on Clovelly’s daunting par-five 9th.

“It feels amazing to win my first GolfRSA national tournament,” he said. “It’s been coming for a long time because I’ve been on a really hot streak, so it was good to finally get it done.

“That eagle on the first was just what I needed. From that point I really started to roll it well and I was hitting it close and making birdies.  I didn’t hit a good tee shot on the 15th, but luckily my ball stayed in play. I nearly made a birdie and from that point, I just told myself to keep attacking the holes.

Often, after a big win, many golfers struggle to perform in their next start, but the 2021 Cape Town Junior Open champion rode the confidence gained from the triumph at Clovelly to win the Westlake Junior Championship the very next day by four shots.

“It’s a great feeling when you can show the people who have invested so much in my career that the effort is paying off,” he said. “I’m really grateful to the SAGDB and Peter Little, and Atlantic Beach Men’s Captain Nigel Pillay, who went to bat for me to join the Atlantic Beach Junior / Student Academy. And Atlantic Beach, who gave me full membership.

“Having their support and my family by my side gives me a lot of confidence. I am excited about the future and to set myself more goals to achieve.”