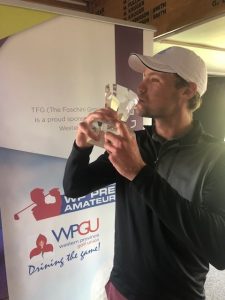 Not a winner on the 2018 PAT, but it was Cooper’s consistent play that gave him the edge over the other contenders. The 22-year-old Cooper had three Top 5 finishes, together with two Top 10s and six in the Top 20. His highest finish was a third place at the King David Mowbray Open.

Cooper played in 15 tournaments and amassed a total 823.67 points.  It was the second lowest points tally for a winner. In 2015, Terence Countinho won the Tour with 760.90 points.

Despite, winning the final round with a 4-under-par 68, and picking up a further 255 points Tyran Snyders had to settle for second position on the PAT Order of Merit.

Snyders currently ranked third on the WP Order of Merit will be leading the U19 provincial team as they compete for the Inter-Provincial to be held at Benoni Country Club 17-21 December 2018.