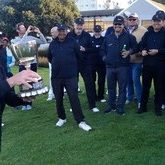 The most hotly contested golf team event outside The Ryder Cup…

The finals of the 2017 Harry Solomon took place Metropolitan Golf Club on Sunday.

It was a close finish going down to the wire.

Milnerton and King David Mowbray A were the top seeds after the round robin stages and had gone through the season unbeaten.

On the way to the finals, Milnerton beat Simons Town 5/3, King David Mowbray B 6/2 and Westlake 5/3;

The Met was in superb condition as the teams teed off on Sunday.

After nine holes King David Mowbray had the upper-hand but it was always going to be tight, with Milnerton staging a comeback on the final nine holes to win the match 4½ – 3½ and lift the trophy.