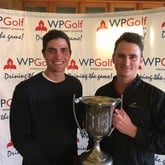 De Zalze Golf played host to the Nomads WP Golf Foursomes Championships on Sunday. The event is used as preparation for the upcoming Inter-Provincials for both the men and the women and sported one of the bigger fields for this event – 43 teams entered.

However, it was early in the afternoon round that this tournament was going to be a close contest.

Bogeys and double bogeys by the two top teams allowed the combination of Elton James and Gerlou Roux to move up the leader board, and post a final round total of two-under-par.

Adrian Ford and Werner Theart slotted five birdies for a bogey free second round, and finished tied third, with O’Reilly and Wicks, on one-under-par, one shot off the lead.

Everts and Hawkins survived a double bogey five on the par 3 16th and a bogey on 18 to book a spot in a a play-off with Elton James and Gerlou Roux which they won after the first hole.