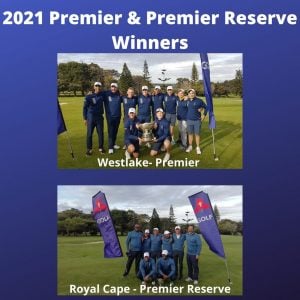 The 2021 Premier & Premier Reserve Final was played at Westlake Golf Club on Sunday the 7th November.
The final round kicked off with Foursomes Match Play and was followed by Singles in the afternoon.
Premier League Final Matches were:
Somerset West vs Durbanville
Milnerton vs Bellville
KD Mowbray vs Westlake

Players were geared up for a tight fight in the Premier League. Between KD Mowbray, Somerset West, Durbanville and Westlake it was anyone’s game to win.  Both Westlake and Durbanville beat their opponents 4 – 0 in the foursome match play.
Winning the 2021 Premier League was Westlake after they beat KD Mowbray 11.5 – 0.5 over all. Durbanville finished in second place beating Somerset West 6.5 – 5.5.
Somerset West finished third putting KD Mowbray in fourth place. Although both these teams finished on the same log points, 5, it came down to games for points, Somerset West on 29.0 and KD Mowbray on 26.0.
Although Milnerton beat Bellville 6.5-5.5 it again came down to games for points which means that Milnerton will be playing a relegation match against the winners of the Premier Reserve side for their spot in the league for 2022.
Congratulations to Westlake on winning the 2021 Premier League.
Premier Reserve was a different story as Royal Cape started the Final round with 12 points on the log and Clovelly in second place with 8. Royal Cape had already won the Premier Reserve league as they pegged it up for the foursome match in the morning.
Premier Reserve League Final Matches were:
Parow vs Kuils River
Rondebosch vs Atlantic Beach
Strand vs Royal Cape

Cassie and his Royal Cape team did themselves proud playing absolutely spectacular golf throughout the season. Winning all their matches this season, their triumph was rightfully deserved.
“We had a very young team this year, which was something different for us.” said Cassie Viljoen, General Manager and Team Manager of Royal Cape. The change in how they put their Premier Reserve team together was most definitely their winning recipe. The talent coming through from Royal Cape is evident and wish them all the best in growing in the game of golf.
Congratulations to Royal Cape on winning the 2021 Premier League.
To view the Premier & Premier Reserve League Final results and logs please visit our website www.westernprovincegolf.co.za