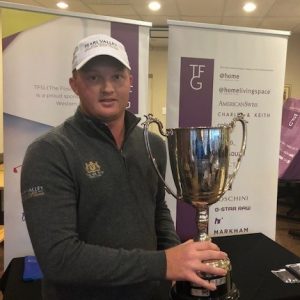 It was consistent play that gave Pearl Valley’s Keegan Thomas the edge to pick up his first win on the Premier Amateur tour at the Bellville Open.  Two rounds of three-under-par 69, total 138 was enough to secure the trophy.

With the possibility of a play-off looming, an untimely three-putt on the short par 4, 18th hole meant Stellenbosch’s Hennie O’Kennedy had to settle for the runner-up spot.

O’Kennedy lead the tournament for the most of the round, but, fell short on the last hole.  He opened up his day with a blistering six-under-par after ten holes, in fact, he was 10-under-par for the day on holes 1-9 but couldn’t match that form with 6-over-par on holes 10-18.

Paarl’s Ethan Smith completed the podium of Boland players with rounds of 70-71 (141).

Bellville’s Gerlou Roux posted the lowest round of the day, six-under-par 66 in his afternoon round.