Home > MEN > A putt above the rest at KD Mowbray

A putt above the rest at KD Mowbray 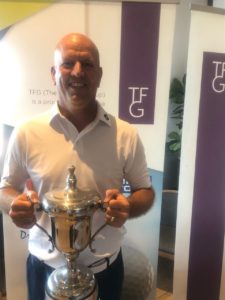 Cameron Johnston picked up another victory on the Premier Amateur Tour at the King David Mowbray Open played on Sunday 17 November 2019.

He laid the foundation with his morning round when he signed for a five-under-par 67, and followed it up with a three-under-par 69 to win by three shots from Pearl Valley’s Keagan Thomas.

It was Cameron’s putter that sealed the victory – in total he holed 10 birdies, together with an eagle on the par 5 14th.

Just one shot adrift from the morning leader, Hilmi Mallick couldn’t replicate his morning round of 68, and completed the podium with a one-over-par 73 total 141.

Mallick is currently leading the Premier Amateur Tour OoM and with two tournaments left to play, he is a strong contender to lift that trophy at Bellville. It will be a close finish, as only 6 points separate him from his nearest rival, Durbanville’s Ayden Senger.