Home > WOMEN > A win will secure the trophies

A win will secure the trophies 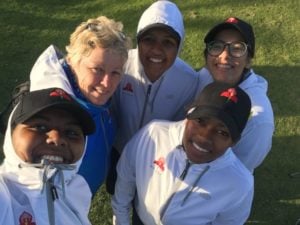 MOSSELBAY, 28 September 2017 – Western Province A pulled within striking distance of log leaders Gauteng A in the top draw of the A-Section on day two of the 2017 SA Women’s Inter-Provincial Championship, while KwaZulu-Natal managed to stay ahead of Western Province B in the battle for promotion in Mossel Bay.

Western Province A routed Southern Cape 6 – 3 to set up an exciting final round tussle with Gauteng A at Mossel Bay Golf Club.

Both teams have amassed four points, but Gauteng A downed Ekurhuleni 7 – 2 to bump their games points to 15.5 and keep control of the log.

Western Province A – trailing by 3.5 games points – will not only need a fast start in the foursomes, but the side will have to score some big victories in the singles to prevent Gauteng A from clinching their third successive victory in the premier team’s championship.

In their second round match against Southern Cape, Western Cape lost the first game in the foursomes, but Kaylah Williams and Jordan Rothman levelled the score. Vicki Traut partnered Zayb Fredericks to win 1-up in the final game.

Reigning SA Mid-Amateur Stroke Play champion Sandra Winter beat Fredericks 3 & 2 to stem the bleeding for Southern Cape, but Ashleigh Mills won the 18th hole to win 1-up. Katia Schaff was 3-up through 13, but Ethel Ruthenberg rallied to win 14, 17 and 18 to halve the match.

In the final match, Azelia Meichtry had the upper-hand from the fourth to the 13th holes, but Traut squared the match at the 14th hole and the pair ultimately halved the hole.

KwaZulu-Natal strengthened their chances in the battle for promotion with a solid 4 – 2 victory over Gauteng North B, but Western Province B is looming large in the rear-view mirror after edging out Free State 3.5 – 2.5.

With four points each and the games points difference 10 to 7.5 in favour of KwaZulu-Natal, this final round clash could go right down to the wire.

KwaZulu-Natal and Gauteng North B drew the foursomes, but Jessica Shurety put the coastal side on the attack when she downed Marinda Pretorius 3 & 2. Bronwyn Rae lost 1-down to Holly Lau, but Lizzie Currie beat Karin Watts 2-up and captain Elsune Roode followed suit to defeated Kaylin van der Merwe by the same margin.

Western Province B and Free State also squared their foursomes.

Odette Booysen raced to a 6 & 4 win in the Singles and Iman Adams wasn’t far behind, beating Bianca Sun 3 & 1.  Gabrielle Venter rallied for Free State and routed Aaliyah Abrahams 4 & 3, while Zanele Mazibuko denied Laylaah Abrahams victory when she squared the match at 17. The pair halved the final hole in pars.

Mpumalanga defeated SA Women’s IPT debutants Northern Cape 5 – 1 to take the lead in the Division 2 log with four points, while North West edged out Limpopo 3.5 – 2.5 to close the gap on Mpumalanga to just one point.