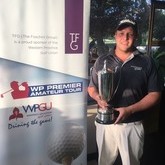 Not often do you sign for a second round seven-under-par 65 and not win the tournament.  Sitting on one-under-par and lying three shots behind the halfway mark leader, Elmo Barnard shot his lowest round 65, but fell one shot short of the overall winner, Adrian Ford.  Barnard putted flawlessly around the Parow course with five birdies and an eagle – total 136 71-65.

It was, however, Adrian Ford’s day. No stranger to shooting low rounds, his best being a 63. Ford also carded a seven-under-par 65; his round included six birdies with two eagles and a lone bogey, for a total 135 (70-65), to pip Barnard to the post.

These 65s are the lowest scores carded on 18 hole course in a Premier Amateur Tour event.

Atlantis’s Colin Smith held the lead after round one with a four-under-par 68  but couldn’t maintain his lead after carding a four-over-par 78 to finish in 16th position.

Adrian Ford returns to amateur golf after seven years as a professional.  In 2009, Ford was South Africa’s top amateur and was ranked 25th in the R&A World Amateur Rankings.  A notable highlight to his amateur career before turning to the pro ranks was winning the Freddie Tait Trophy (highest qualifying amateur) at the South African Open in 2008.