Another PAT win for Tyran Snyders 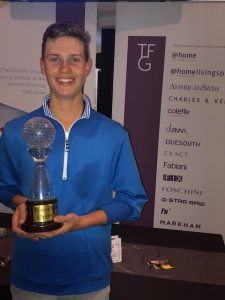 “Practice, practice and practice”, his father said after the round – well it has certainly paid dividends.

Durbanville’s Tyran Snyders is now a second-time winner on the Premier Amateur Tour when he carded a six-under-par total 138 (71-67) to win at the Erinvale Open on Sunday 12 August, 2018.  His first win was after a play-off at the Steenberg Open in May.

Not content with his opening round 71, Snyders blitzed through the Erinvale course with eight birdies and three bogeys to finish three ahead of his nearest competitor, Elton James.

James, who was the defending champion, couldn’t improve on his three-under-par morning round and finished on a total 141 (69-72) one shot clear of Stellenbosch’s Luan Boshoff 142 (72-70).

Snyders, James and Boshoff were the only players to break par on the 6500 metre, Erinvale course.