Another victory for Travis Procter 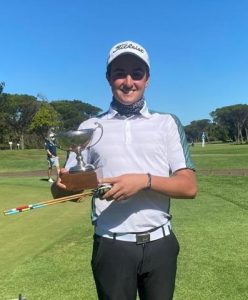 Another victory for Travis Procter

The VERNON DICKSON MEMORIAL Junior Championship was held at a somewhat windy King David Mowbray GC yesterday, Monday the 8th February. The tournament was to honour Vernon Dickson, who ran the WP Junior Golf Foundation during the 1970s. As a result of his sterling work Mr Dickson was inducted into the SA Golf Hall of Fame in 2017.

Travis Procter (Durbanville) was the winner on the day. Travis started with a dropped shot on the 1st hole and turned in 37. Travis started the second 9 well with birdies at the first 2 holes followed by additional birdies at the 14th (par 5) and 18th (par 4).  In the end a fine 70 by Travis in difficult conditions.

Travis has been in good form of late, also winning the last junior tournament played, the BELLVILLE Junior Championship.

On 74 was the highest place girl, Bobbi Brown (Steenberg), as well as Craig Jacobs (Bellville)

The B division was won by Graeme Engelbrecht (KD Mowbray) on a respectable gross 82, whilst the C division winner was Blake Fontaine (Devonvale) on 32 points.

In the U13s Minjun Heo (KD Mowbray) headed the field with an 80 whilst Joshua Matthysen blew the U13B field away with 42 points – a great 82 off his 16 handicap index.