Another win for Carlo O’Reilly 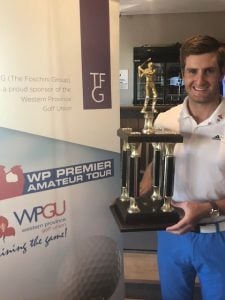 Lying just one shot behind the morning round leader, Gerlou Roux -4, O’Reilly replicated his first round, 69, to win by two strokes from Hermanus’s Tyran Davidowitz 71-69 (140), and by three from Clovelly’s Matthew Cooper 71-70 (141).

A double-bogey on the par 3, 4th could have sent O’Reilly down the leaderboard but O’Reilly held on, and his win was secured with a birdie on the par 59th.

Gerlou Roux had a round to forget in the afternoon, after leading in the morning with a four-under-par 68, his afternoon card was littered with bogeys and slipped out of contention.

With a T23 position for Sean Howell, the current PAT leader will want to find better form at Strand on Sunday, 18 November if he wants to retain his top spot as the PAT moves into the business end with the final event on the Tour before the Finals on 2 December.