Home > NEWS > Back on the Podium for Carlo O’Reilly

Back on the Podium for Carlo O’Reilly 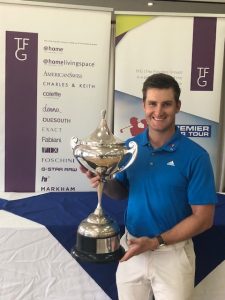 Atlantic Beach’s Carlo O’Reilly 72-70 (142) is a winner again on the Premier Amateur Tour – he won by one shot from Westlake’s Kyran Hawkins and Bellville’s Sam Simpson at the Durbanville Open held on Sunday.

O’Reilly won his first PAT event at the Clovelly Open in 2015.

After a dramatic collapse from Hennie O’Kennedy, the round one leader, O’Reilly kept himself in contention with two birdies on his 16th & 17th holes. Six birdies gave O’Kennedy the round one lead on four-under-par, but he couldn’t buy a putt in his last 18 holes and signed for an 81 to finish T15 on five-over-par total 149.

Sam Simpson was on top of the leaderboard with three holes to play. Three consecutive bogeys in a row meant he handed the title to O’Reilly and had to settle for tied second spot – 71-72 (143) with Kyran Hawkins.