Home > MEN > Back to Back wins for Senger

Back to Back wins for Senger 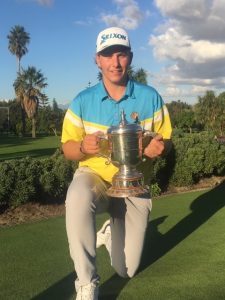 With a six-shot lead and nine holes to play, Durbanville’s Ayden Senger looked set to walk away with another tournament win at the Premier Amateur Tour (PAT) Rondebosch Open held on Sunday 14 April 2019.

It wasn’t all plain sailing.  After dropping four shots in three holes, he held on by dropping a six-foot par putt on the par 4, 18th to secure the win by one shot from KD Mowbray’s Cameron Johnston.

Not phased by the inclement weather, Senger carded rounds of 68-72 (140) to score back-to-back wins.