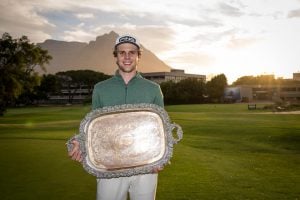 For 54 holes, Sean Cronje was in the driver’s seat but it was Martin Vorster who ultimately prevailed.

High winds had characterised much of the first round and had made for a tough day of scoring as only three players managed to break par. Leading the way was Durbanville Golf Club’s Cronje who carded an opening round of two-under par 70.

Calmer conditions in round 2 led to a number of low scores with a host of players improving significantly on their day 1 performances. Josh De Aguiar in particular improved by an astonishing 18 shots from a first-round 84 to a six-under 66 on day two.

Cronje carded a 66 of his own which featured seven birdies with his only blemish coming at the par-4 opening hole.

Golf RSA Elite squad member Martin Vorster leapt into contention in the third round with a sparkling nine-under par 63 in the morning round. Beginning on the par-5 10th, Vorster carded a sublime 7-under 29 on his opening nine which included a run of five consecutive birdies from the 14th-hole. Though his inward nine was sedate by comparison, birdies at the par-5 6th and 9th respectively earned him a share of the 54-hole lead with Cronje.

After beginning his third-round with four pars, Cronje offset a bogey at the par-4 5th with a birdie at the 6th. Having turned in even par, he mixed birdies at the 10th, 14th and 18th with dropped shots at the 12th and 17th respectively. With Simpson one adrift and Duminy a further shot back – the stage was set for a thrilling final round.

Cronje edged ahead early in the final round with a birdie at the par-4 3rd as he moved to 10-under par for the tournament. A bogey at the tricky par-3 8th, however, meant that he slipped back to level-par for the day. Though Cronje birdied the 10th, bogeys at the

Vorster’s outward nine meanwhile consisted of an eagle at the par-5 14th and a bogey at the long par-4 15th to go along with seven pars which earned him sole-possession of the lead with nine holes to play.

Simpson began his back-nine with birdies at the 10th and 11th to snatch the lead away from Vorster.

After making a drop on his 12th hole of the day – the par-4 3rd- Vorster picked up shots at the fourth and sixth holes to finish at 11-under par for the event.

Coming down the stretch, Simpson registered a birdie-4 at the 14th-hole but a bogey on the 17th meant that a playoff was needed to separate him and Vorster.

Vorster capped a remarkable day with a par-4 on the first playoff hole – King David Mowbray’s 18th – to claim the title.