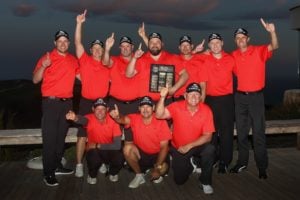 GEORGE, 13 October 2017 – Central Gauteng produced an unparalleled performance over the first four rounds at Oubaai Golf Resort and Spa to secure the South African Mid-Amateur Inter-Provincial title for a fourth time on Friday. With the victory, the mid-amateur team also completed a Grand Slam of SA Inter-Provincial titles for the Lions.

“This is an incredible moment for the whole team,” said manager Jaco du Plessis. “Our juniors won last year, our seniors and premier teams both won this year and now this incredible league of gentlemen completed the cycle for Central Gauteng.

“They dovetailed to perfection to run up 10 points against Ekurhuleni, Gauteng North, KwaZulu-Natal, North West and Boland and gained us the games points we needed to go into the final round with confidence. Not even our loss to Western Province could dampen the spirits in the camp.”

The Lions carried a two point advantage over the defending champions into the final round clash.

With 45.5 games points in hand, Western Province faced an almost impossible challenge. Not only did they have to win the match to retain the title, they had to win by at least 11 games.

A mild south-easterly showed up at the start of the final day and gathered speed. With the wind pumping at 45 kilometres per hour, Western Province asserted themselves quickly and took a 3 – 1 lead in the foursomes. An improbable task suddenly turned into a possibility.

“Western Province came at us with everything they had, but our guys stood their ground in the face of great adversity,” said Du Plessis.

“I think only the past winners of this tournament can understand the pride we share as a team right now. It was incredibly cold and the wind was really strong. We knew the final round would be a real battle of attrition. Our guys knew what was required and they went out there and got us the crucial points in some tightly contested skirmishes.”

“Throughout the week, everyone on the team had a moment where they need to perform and they all delivered a champions’ performance,” said Du Plessis. “We set our combinations before we arrived and that added to the sense of continuity and, as much as golf is an individual game, our team spirit was phenomenal and definitely a huge factor in our victory.

“Congratulations to Ruan (Botha) and Dylan on taking first and second on the Most Valued Players list and a big thank you Andy Truluck, the best assistant manager any team can have. Andy, I look forward to returning the favour at the SA Under-19 Inter-Provincial in December.”

Gauteng North scored a decisive 9.5 – 2.5 victory over North West to cement fourth spot in the final log and KwaZulu-Natal downed Ekurhuleni 7.5 – 4.5 to tuck into fifth on six points. North West’s victory over Boland and a draw against Ekurhuleni secured the side sixth place, which means Boland got the wooden spoon 12 months after winning the battle for promotion at Rustenburg Golf Club.