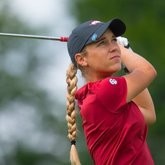 Four up after seven holes, Milnerton’s Cara Gorlei got off to a dream start in the final round against Jessica Dreesbeimdieke (Windhoek) at the Sanlam SA Women’s Amateur Championships held at Stellenbosch.

However, Dreesbeimdieke was not giving up the match that easily, and rallied with three unmatched birdies, and when the players reached the 16th Jessica was now in the driving seat.

Staring defeat, at two down with only two holes to play, Gorlei rallied with a chip-in birdie to keep the match alive. A regulation par for Gorlei on the par 4, 17th brought the scores level; the trophy and the Championship was Cara’s when she rolled in her birdie putt on par 4 18th.

Cara is the first Western Province player to lift the national Championship trophy since Kelly Shean in 2005.