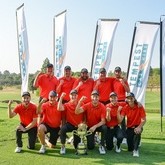 “There were so many permutations after the fourth round,” said delighted manager Jaco du Plessis.

“Although we topped the A-Section log, Southern Cape, KwaZulu-Natal and Western Province were still in the fight. I told the guys that we could only control what we did on the last day. I told them to go out and to take it away from them.

“In all my years as a manager, I’ve never seen a fight like that. I demanded perfection and they executed brilliantly. We won 3.5 points off Western Province in the foursomes and that’s when we know that four wins in the singles would do it for us. Four points would take Southern Cape out of the equation after they went 1 – 3 down in their foursomes against Ekurhuleni and Gauteng North had the upper-hand over KwaZulu-Natal with a 3 – 1 lead.”

Andrew Carlsson from Bryanston mowed down Gerlou Roux 4 & 3 to get their first point, but Western Province clawed their way back into the match with victories from Carlo O’Reilly and Chris Wicks.

Bryce Leach was 1-down through 14, but won 15 and was all square playing the last, while Ryan Dreyer was 1-up through 15, but reached the 18th 1-down after Adrian Ford birdied 16 and eagled 17.

“Fordy got himself into trouble off tee and couldn’t go for the green in two, but Rhino played hole perfectly. He hit a great drive down the middle and the perfect shot in and squared the match for an important half point.”

David McIntyre, dormie 1-up against Western Province captain Elton James, pulled off an unbelievable up-and-down from behind the green to score the fourth point that won Central Gauteng the title.

Cameron Moralee and De Smidt both halved their games to push the side’s final tally to eight points and take Southern Cape completely out of the fight.

Du Plessis said the team did everything expected of them, and more.

“We had 20 players in the trials and we had five months of preparation for this year’s SA IPT,” he said. “The team was selected on match play, not stroke play, and the eight players who got the nod were absolute rock stars this week.

“Our philosophy has always been that inter-provincials are not about individuals; it’s a team effort and the players have to embrace that and become a pack of wolves. I am incredibly proud of this pack. They brought everything and they left nothing out there.

“To our assistant manager, Andy Truluck. You walked nearly 13 km every day to give me the information I needed to guide the players and you never once complained. No job was too big or small. You are a legend, Andy and this win is as much yours and ours.

“I honestly can’t say enough about Bryanston Country Club. The members, management and staff have shown such tremendous support for the SA IPT. Everyone went the extra mile and I want to congratulate the club on hosting an absolutely fantastic championship.”

“We often get asked where the affiliation fees go and this is exactly where we invest the funding provided by our members,” he said. “Their fees help us to promote golf development and shape the future world beaters of this country;

“I was playing a senior league match at Modderfontein Golf Club when Haydn Porteous won the Czech Masters. The roar that went up in the clubhouse could be heard halfway around the world. Some people forget that Haydn played all his golf from junior level at Central Gauteng.

“For almost every golfer, the SA IPT is the top golfing moments of their career. With this year’s IPT coming up, Haydn posted a throw-back photo on Instagram. It was a photo of Central Gauteng’s victory at Bloemfontein Golf Club in 2011 with Haydn front and centre. Haydn, Louis, Charl, even Ernie and Retief are all products of golf development at union level. This is where the futures of our major champions are shaped.”

Ekurhuleni and Gauteng North’s future champions certainly stood up to be counted.

Ekurhuleni took defending champions Southern Cape completely out of the title race with a 9 – 3 victory, while Gauteng North ended KwaZulu-Natal’s hopes with a 7 – 5 victory.

In the B-Section, Free State won the battle for promotion with an unbeaten performance after beating North West 6.5 – 5.5 on the final day.