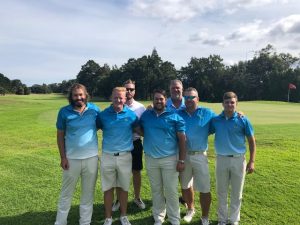 There was a new look format for the 2018 Premier League season – 2 sections with 6 teams a piece. The Westlake team won by the narrowest of margins 0.5 from King David Mowbray.

Strand, however, finished further down the log, bottom without a win, and had to play a relegation/promotion against their neighbours Somerset West who topped the Reserve League log.

The morning foursomes was a close contest with Strand taking a 2-1 lead with the singles. It, nevertheless went down to the wire in the afternoon singles.

In the first game out, Werner van Rooyen (Strand) lost against Ian Truter and so the scores were level.

However, Strand were not giving up their Premier League spot without a fight and the afternoon was halved 3-3 with wins from Johann Germishuys, Francois Cilliers and Elmo Barnard to secure the win for Strand.