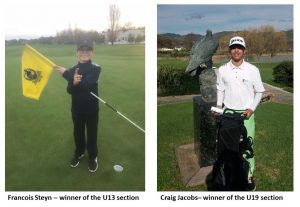 The Erinvale Junior Championship was played in testing conditions at the picturesque Erinvale Golf Club this past Sunday, 27th June 2021.

Surrounded by the majestic Helderberg and Hottentot Holland Mountains, the golf course has two distinctly different nines. After negotiating the first nine holes through narrow fairways the players had to navigate the 2nd 9 which flows into the foot of the mountains whilst the winds gusted up to 40 kilometres at times.

Craig Jacobs (Atlantic Beach) has a special liking for Erinvale – winning the BFMJS#Erinvale played at this venue in November 2020. No 68 this time but a well compiled level par 72. Craig’s final 3 holes was the real difference with an eagle at the par 5 16th followed by 2 pars at 17 and 18 and a 3.5 metre on the final hole! Based on the difficult blustery conditions Craig compiled a really solid round – an eagle, a birdie and 3 bogeys.

Matthew Lotz (Milnerton) was the runner up on 74. He had a horrendous start with a triple drop on the 1st hole which saw his composure come through, offsetting the bad start with 2 birdies on the next three holes. Matthew did what no other player in the large field could do – that is birdie the final 18th hole!

The U13s also had an eventful day with 4 players tied on 81 gross. In the end Francois Steyn (Durbanville) won this play-off. The other players involved in the play-off were Nathan van den Berg (Stellenbosch), Booye Walters (Bellville) and Ghery Rabie (Robertson). Jude Samuels (Royal Cape) blew the opposition away in the U13B division – winning with a great 47 individual stableford points.

The next stop for WP Junior Golf is the Hazendal Par 3 Course on Sunday the 4th July.