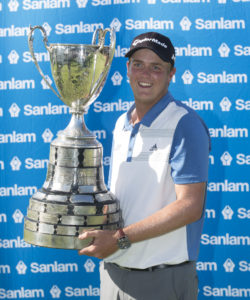 DURBAN, 2 March 2018 – Six-under-par, yet 1 down after 18 holes; 3 down and six holes to play, Deon Germishuys pulled out all the stops to win on the 39th hole after a mammoth day of golf.

Not since Ernie Els lost to Neville Clarke at the 40th hole in 1988 has the 36-hole final of the Sanlam South African Amateur Championship gone further than 38 holes.

“This is a dream come true,” said Ernie Els and Fancourt Foundation Germishuys. “It was such a tough contest and Chris was an incredible opponent. I have dreamt of this moment so many times, and it feels almost unreal to stand here with the trophy.

“Chris never gave up, not even until the last putt. I had to fight really hard to stay in the match and I am so proud right now of the way I hung in there. I’m really humbled by the victory. To walk off the course and receive the message from Ernie congratulating me was the icing on the cake.”

Germishuys was named to the GolfRSA National Squad last month and he will have less than a day to celebrate his victory before he has to don the green and gold.

The 18-year-old will be making his international debut for South Africa in his national debut alongside fellow Western Province golfer Ayden Senger, Martin Vorster from Southern Cape and Werner Deyzel from Gauteng North in the All-Africa Junior Golf Championship in Morocco. The quartet will be chasing South Africa’s 20th consecutive victory in the 72-hole championship at the Royal Dar Es Salam Golf Course in Rabat.