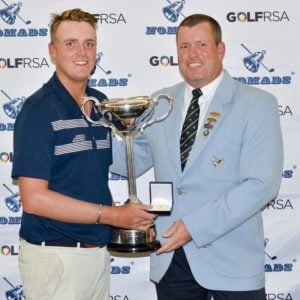 It’s not how you start, it’s how you finish.

Strand’s Deon Germishuys did just that at the SA U19 Boys Strokeplay Championship held at Woodhill Country Club earlier this week.

His final 36 holes included 11 birdies, 1 bogey and an eagle.

Germishuys has had a serious run of form since clinching the SA Amateur Matchplay title last month in Durban.  No sooner had he picked up that trophy, he was part of the team representing South Africa, who successfully defended their title in the All Africa Junior Championships held in Morocco.