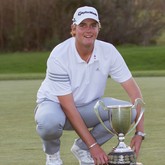 Deon Germishuys cruised to a sensational five shot victory in the Southern Cape Open on Sunday. The 17-year-old Strand golfer was delighted to etch his name on a winner’s list that dates back to the legendary Otway Hayes in 1937 after carding rounds of 73, 68, 72 and 72 to triumph on three-under-par 285.

“The Southern Cape Open was going to be my last provincial start before the SA Inter-Provincial in September,” he said. “I just really wanted to make this one count, because I start matric exams this week and there won’t be much time for golf.

“Now my name is on this trophy with Louis Oosthuizen, who won it twice and Sunshine Tour winners like Brandon Stone, Oliver Bekker and Justin Harding. This is a huge boost for me.”