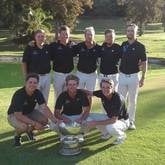 It was back in 2006 that Durbanville last won the Premier League.

2017 – and Durbanville needed full points to have a remote chance of winning the Premier League held on Sunday at Bellville Golf Club – who would have thought.

And, as luck would have it, the cards fell into the right place for the youngsters at Durbanville.

Durbanville were convincing winners against both Bellville 6.5/2.5 and Rondebosch 5.5/3.5 and so picked up maximum points, and finished with 12 points.

In what was always going to be a tough match, Westlake dropped points against Milnerton A 6.5/2.5, yet were convincing against Royal Cape 8/1 – Westlake also had 12 points.

By beating wooden spoonists, Clovelly 5/4, Milnerton B now had a chance to top the log outright but came unstuck against Strand 5.5/3.5, and had to settle for 11 points, which took them out of the running.

So, it was down to the wire – Durbanville had a better points difference, and were declared the winners in a nail-biting finish to the 2017 Premier League.

With five wins and no loses, King David Mowbray were outright winners in the Premier Reserve League. Somerset West were runners-up followed by the WP Juniors team.