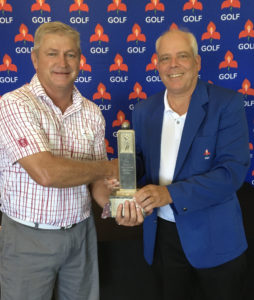 Stanley De Beer birdies his final hole to win the Western Province Senior Open by one stroke – holding off a charging Francois Hanekom at Rondebosch Golf Club on Thursday.

What a final round that was. There really was no telling whose title it was for much of the day as several players looked in with a shout.

There was early action in the second round – De Beer birdied the opening hole while Fransman made a bogey-five and there was a two-shot swing right out of the gate. Fransman erased the set-back at the very next hole, registering a birdie-2 at the par-3 2nd. The two-and-fro theme continued at the fourth as Fransman drew level once again with his second birdie in three holes.

As if trading blows, De Beer responded with a birdie of his own at the next hole. His slender one-stroke advantage remained until the ninth hole before the Links at Fancourt member doubled his advantage with a terrific birdie on the par-5 9th – Rondebosch’s stroke-1.

Heading in to the back-9, it appeared a two-horse race as King David Mowbray’s Mark Louw failed to build up a head of steam, carding eight pars and a bogey at the ninth to fall four shots adrift.

Enter Francois Hanekom. Starting on the first, Hanekom made a shaky start with a bogey-5 before picking a birdie-4 at the third. A bogey at 5 and a birdie at 6 followed as the Stellenbosch member turned in even-par. A birdie at the 11th galvanised Hanekom as he went on an absolute tear. Five birdies on his inward eight holes- including three in a row from the 13th- was simply sublime and vaulted Hanekom right into contention.

After 28 holes of rock-solid golf, it all began to unravel for De Beer. A bogey at the 11th was the first of three bogies in a six-hole stretch. Hanekom now had a share of the lead and safely in the clubhouse. De Beer needed to birdie one of the last two if he was to prevent a play-off.

Clutch finish – that is the only way to describe De Beer’s finish. After parring the par-5 17th, De Beer made a spectacular birdie at the final hole to edge out Hanekom by a single stroke. On his finish, De Beer said:

“Bit of a nervous finish actually, quite a bit of nerves from about 14, 16, 17, I relaxed quite a bit and then 18 I hit myself into a bit of trouble. I was quite relaxed about that and then hit a nice shot out there and had a nice positive birdie putt”, De Beer said

“I wasn’t aware of what Francois Hanekom did but I was aware of my playing partner (Ralph Fransman) was lying next to the flag, also putting for a birdie. He would have tied with me then so I knew I needed the birdie to seal the victory. “

Defending champion Craig Poulton showed tremendous character to rebound from the disappointment of an opening round of 80. Poulton kickstarted his round by holing out his second at the par-4 3rd. Even though he gave those shots back at the next two holes, he showed his class to come roaring back with three birdies on the trot from the 8th.

Unperturbed by a bogey at the mammoth 11th, he notched up two further birdies at the 13th and 14th. Poulton’s up and down day continued with back-to-back bogeys before he recorded his sixth red number of the day at the 17th. A par at the last capped off a remarkable turnaround for Poulton, who was pleased with his final-round showing.