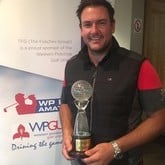 Two errant shots resulting in bogeys ultimately cost Somerset West’s Jason Hale the opportunity to win his second Premier Amateur Tour event (PAT).  Sitting at four-under-par on his 12th hole, Jason couldn’t hold on to his three-shot lead and had to settle for second place 70-72 (142), behind winner Elton James at the Erinvale Open held on Sunday.

For once the weather wasn’t the topic of conversation at Sunday’s Erinvale PAT Open. With the greens running fast, and not much wind Westlake’s Elton James holed out for a birdie on the par 4, 18th to win the Erinvale Open by one shot – 72-69 (141).

Trailing Jason Hale by three shots on the 16th, a well-timed eagle meant Elton James was back in the running – he was now only one shot behind with two holes to play. A bogey at the par 4, 17th was cancelled out when James found the 18th green with his 9-iron second shot to within 3 metres – the one putt secured the win.

This was ideal preparation for James as heads up the WP team to participate in the Premier Inter-Provincial to be played at Bryanston Country Club, Johannesburg 18-22 September 2017.