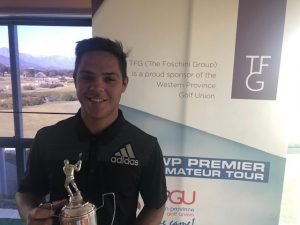 The ‘South Easter’ blew from the first hole until the last. Windy, windy, windy… the field battled against the elements at the Strand Open held on Sunday 18 November 2018.

Davidowitz shared the first round lead (+3) with Strand’s Elmo Barnard. However, with an eagle, double bogey, bogey finish, Davidowitz managed to hold off a challenge from KD Mowbray’s Cameron Johnston who moved up the leader board after carding a two-over-par 74, the lowest round of the day, to win his first PAT event 75-76 (151).