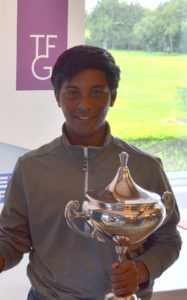 The diminutive figure of Rondebosch’s Hilmi Mallick outplayed the field at the Royal Cape Open on Sunday.

An impressive 3-under-par first round 69 set him up with a four-shot lead for the afternoon round. A two-over-par 74 and total 143 enabled him to hold on to his lead and set himself up for his first tournament win.

Durbanville’s Sean Howell 73-72 (145) was in the chasing pack and despite a late brace of birdies was unable to make up the ground needed on the leader, and had to settle for the runner-up spot.

Despite an opening round 76, KuilsRiver’s Neswill Croy fought back with a 1-under-par 71 total 147 to finish in third position.