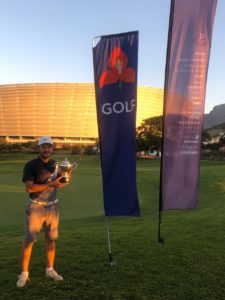 Bellville’s Aran Sinclair is another first-time winner on the Premier Amateur Tour.

After shooting a one-under-par 69 and lying four shots behind Donovan Liddicoat, the first round leader, Aran Sinclair proceeded to putt himself into contention with a final round 66, which included seven birdies, and win the Metropolitan Open by a slender one stroke from Strand’s Elmo Barnard 67-69 (136).

Strand’s Donovan Liddicoat was also on track for his first PAT win.  An untimely triple bogey for the par 4 13th, brought his challenge to an abrupt end – 65 – 72 (137)

Elmo Barnard led the field for some time in the afternoon, but he also had a triple bogey on the par 4 16th, and had to settle for runner-up spot.