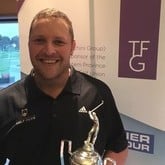 It is all about the putting, and Durbanville’s Adrian Ford did just that.  Ford putted his way to victory at the Premier Amateur Tour – Strand Open held on Sunday.

At the halfway mark, Adrian was lying in sixth position on two-under-par 70,  with the joint leaders, Stellenbosch’s MJ Steyn and Bellville’s Gerlou Roux on four-under-par 68.

However, Ford had clearly figured out the greens in the morning round, and holed out for eight birdies in the afternoon to finish two shots clear 70-65 (135) from MJ Steyn.

This is the second time Ford has signed for an afternoon round of 65.  Both Ford and Elmo Barnard carded 65s at the PAT – Parow Open held in May.

With two consistent rounds of 68-69 (137) MJ Steyn could only manage to finish is second position.

Gerlou Roux got off to a flyer in his second round with three birdies in four holes, but lost ground after a triple bogey on the 6th and a further three double drops to finish with 68-78 (144).