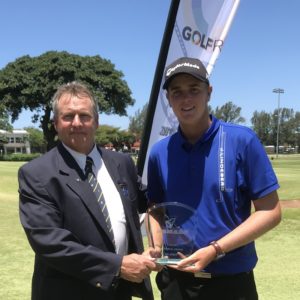 DURBAN, 12 January 2018 – Strand’s Deon Germishuys  collected his first trophy of season with a runaway victory in the Nomads National Order of Merit Coastal on Friday.

A three-under-par 73 in windy conditions at Royal Durban Golf Club saw the talented 17-year-old from Strand Golf Club close out a seven-stroke victory on nine-under-par 210.

“I’m really pleased with the way I handled myself,” said Germishuys. “The course set-up this week was really challenging. The greens were rock hard, so you couldn’t attack the pins and the wind made a tricky course even tougher.

“This is a great result ahead of the Free State Open next week and the Gauteng North Open later this month. It’s the first time that I’ll play those tournaments on the Open Amateur circuit. This win gives me some confidence and hopefully I can keep building towards the SA Stroke Play.”

Germishuys broke on to the golfing radar when he claimed Nomads SA Boys U-19 Stroke Play Championship title in 2015, but it was nearly 16 months until he returned to the winner’s circle. His success in the inaugural Bridge Fund Managers Junior Series event at Royal Cape Golf Club in July last year sparked a return of confidence.

After a runner-up finish in the Sun International Africa Junior Open at Fish River Sun in early August, he felt that a win was close. Just a week later, Germishuys cruised to a sensational five shot victory in the Southern Cape Open at George Golf Club. In November, he doubled up on Bridge Fund Manager Junior Series titles in the fifth event at Kingswood and he finished the 2017 season with a career-high fifth place on the South African Golf Association’s Junior Rankings.

Germishuys made a fast start in Durban with a six-under-par 67 on Thursday morning, but conditions worsened in the afternoon.

“The wind pumped at 35 km per hour, but I managed to get around in 73 in the second round to open up a two shot lead on Luke Mayo,” said Germishuys.

“I started the final round par-birdie and that set me up nicely. I hit a soft gap-wedge to 10 foot at the second and holed the putt. Then I just looked after par. I laid up and chipped it close at all four par fives and birdied five, 10 and 13 to get to 10-under.”

“The wind was pumping at 40 km per hour, but it would come and go and it was tough to select the right clubs,” he said. “During the practice round, I hit driver, 9-iron at 17. It played into the wind all rounds, so I hit driver, 4-iron. In the last round, I left it short in the greenside bunker.

“I had 10 footer left after the trap-shot, but my putt just slipped past on the left. It wasn’t a train smash, because I had shots in hand. It’s been a while since I won, and it felt great when I made par at the last to seal the win.”

Western Province junior Sam Simpson – also a Bridge Fund Managers Junior Series winner – returned a 72 to finish in second on 217. Luke Mayo from Mount Edgecombe battled to 77 to finish in third on 219, Central Gauteng’s Cole Stevens carded 74 to take fourth on 221 and Jason Broomhead from KwaZulu-Natal rounded out the top five on 223 after signing for a final round 74.