Hawkins bursts through for first win 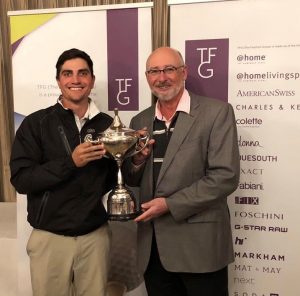 Another breakthrough on the Premier Amateur Tour.

Rondebosch’s Club Champion, Kyran Hawkins, now playing out of Westlake did enough to stave off the challengers at the PAT – Royal Cape Open held on Sunday.

His opening round of four-under-par put him in pole position ahead of Pearl Valley’s Keegan Thomas, a recent winner of the Bellville Open.
A two-under-par 70, final round was enough to stay ahead of the field, and Hawkins (68-70) 138, finished one stroke ahead of runner-up Tyran Snyders.

Snyders continues his good run of form. He bounced back from an indifferent morning round 71, to card a final round four-under-par 68 (139), with a last minute birdie on his 18th hole to clinch second spot.

Keegan Thomas did manage to cancel out six bogeys with seven birdies, but it wasn’t enough to move to the top of the leaderboard and pick up a back to back win – (69-71) 140 .

Westlake’s Pietie Loubser figured out how to play the course in his afternoon round – he overturned a five-over-par 77, to a five-under-par 67 final round – total 144 to finish tied fourth with Clovelly’s Yul Tsai.