Ian Snyman named the C-USA Golfer of the Year 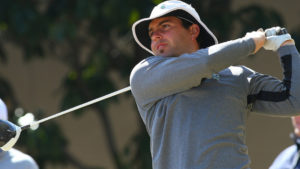 North Texas – Ian Snyman was named the C-USA Golfer of the Year and selected to the first team after leading the way this year for the Mean Green, who were consistently ranked in the top 65 in the country and were the highest-ranked team in the conference all year. Snyman is the second player in program history – and first since Neal Collins, the Big West Golfer of the Year in 1999 – to be named conference golfer of the year.

Snyman from Bellville, South Africa, who fell victim to the NCAA rule saying international students can’t wait to start college without losing years of eligibility, had a 71.66 scoring average in 10 tournaments this year. His GolfStat national ranking of No. 64 is the highest of any C-USA player, and he is ranked in GolfStat’s top five nationally in putting and overall short game. Snyman was named C-USA Golfer of the Week in back-to-back weeks on Feb. 21 and Feb. 28.

“Ian had a phenomenal year,” UNT coach Brad Stracke said. “He’s going to be close to being an All-American when it’s all said and done. He carried this team and led us, and it’s really unfortunate he’s not going to have his last year of eligibility because of the NCAA rule. He worked hard for all he’s gotten and he improved every year. He’s the prototype player that we need at UNT.”

Snyman, who was C-USA Freshman of the Year and a second-team selection in 2016 and a first-team honoree in 2017, finished tied for second at the C-USA tournament. He was joined on the all-conference team by teammates Viktor Forslund and Vitek Novak, who were both named to the five-person all-freshman team.

Forslund and Novak acclimated themselves to the college game quickly and didn’t take long to become fixtures in the Mean Green tournament lineup.

Forslund, who came from Sollentuna, Sweden, played in eight of the team’s 10 tournaments and finished with a scoring average of 74. He tied for the team-best round of 67 twice. Novak, who is from Karlovy Vary, Czech Republic, played in nine tournaments and had a 75.81 average.

“It shows that the future is really bright for us that we had two freshmen make the all-conference team, and I think our class coming in next year is really strong,” Stracke said. “Recruiting is going well. I think the new facility at Maridoe is attracting recruits, and it’s putting us on the forefront with the new prospects coming in.”