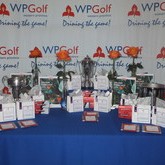 The Irvin, Rutherford & Lefson trophies were played for at Strand Golf Club on Monday. This is a knock-out matchplay team event.

In the Irvin Trophy, Rondebosch A knocked out Rondebosch B 3 up, and accounted for Royal Cape 8 up.

Steenberg won their morning round to take on Parow and Westlake in the finals beating them 2 up a piece to win the Rutherford trophy.

And the combination of Clovelly’s June Harrison, Bridget Woodhouse, Caroline Ayers and Liz Cameron were successful against Strand 2 5up and Rondebosch 3up to take the Lefson Cup.