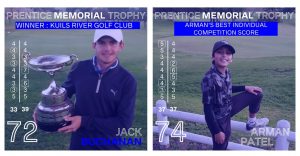 The past few days of heavy rain in the Cape did not dampen the enthusiasm of the junior golfers that participated in the 100th anniversary of the playing of the Prentice Memorial Trophy. Although the Kuils River Golf Club was somewhat wet in places, it proved to be a thoroughly good test for all the participants.

The history of today’s tournament goes back to the turn of the last century. J.A.W. Prentice was killed in action in the first few months of World War 1 but before going on active service he bequeathed 60 pounds to the SAGU for the purpose of encouraging the youth of South Africa to play golf. An amount of 10 pounds was given to the WPGU and it was decided that the most suitable way to carry out Prentice’s wishes was to purchase a floating trophy. The first JAW Prentice Memorial competition took place in 1921!

After tying on a score of level par 72 Jack Buchannan and Matthew Lotz (both from Milnerton GC) headed back to the course for a play-off. On the second play-off hole Jack Buchanan beat Matthew Lotz to be crowned the Prentice Memorial champion for 2021.

During regulation play Jack was coasting comfortably along at 4 under par after 13 holes, but 2 double drops in three holes somewhat derailed his victory march. Jack steadied the ship with 2 closing pars. Matthew was steadiness personified – 2 early birdies offset by drops at holes 15 and 16. Close on their heels were 3 players on 73 – Christopher Gutuza (KD Mowbray), Mitch Phigeland (Atlantic Beach) and Jaydon Galant (KD Mowbray).

The B division was comfortably won by Quewen Botha (Atlantis) on a gross 84 whilst local member Tamsen Skippers (Kuils River) secured the C division with 29 stableford points.

The Under 13s produced great golf with 11 year old Arman Patel (Steenberg) pipping Henru Walters (Durbanville) in a play-off. Both players recorded gross 74s. This was Arman’s best competition score to date. Well done to both players on exceptional performances.