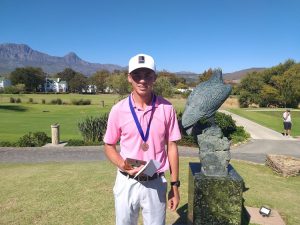 The Erinvale Junior Championship was the 6th event in a series of 14 local junior opens, called the “Championship Tour 2022” in which the qualifiers compete in a 36 hole final in October. Other qualifiers at this stage are Jack Buchanan (at Parow), Craig Jacobs (at Kuils River), Jan Stals van Rooyen (at Bellville), Jungwi Lee (at KD Mowbray), and Pearce Lewin (at Durbanville).

James Boustead and Bobbi Brown (Steenberg) walked to the final green at Erinvale Golf Club, both being on level par. A 3 metre birdie putt, drained on the final green, separated James from his closest challenger. James started strongly with 2 early birdies but a double drop at the par 4 6th was a small hiccup – a total of 5 birdies was offset by this double drop and 2 bogeys.

Bobbi Brown did not have a great start, a double drop at the 1st, but 4 birdies during the course of play was offset by another double drop at the par 5 13th. This performance was a continuation of her recent good form, winning the NOMADS SA Junior International Girls by a convincing 6 shots at Rondebosch Golf Club in March.

Jungwi Lee (Royal Cape) and Gabriel Firer (KD Mowbray), both on gross 74, finish 3rd and 4th respectively. The B division was won on a count out by Mateo Rossi (Atlantic Beach) on 89 whilst Taedi Hansraj (KD Mowbray) won the C division on 39 points.

In the Under 13B division 9 year old Alwyn Rossouw (Bellville) scored a tidy 36 points off his handicap of 23. The Under 13As saw a titanic battle between the two Clovelly members, Evan Marais and Kaitlyn van de Vyver – the two 12 year olds tying on a gross 77 – Evan Marais winning the count-out. Evan played a steady round – only 5 bogeys – whilst Kaitlyn had 5 birdies in her round interspersed with 6 bogeys and 2 doubles.

A wonderful day of golf enjoyed by a full field of 92 juniors.